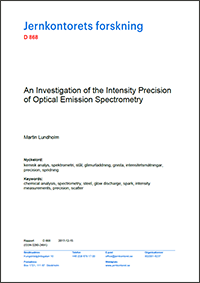 The product has been added to the shopping cart
Something went wrong!

Uncorrected, raw intensities were recorded from a selection of pure iron and alloyed steel samples using Kimabs special glow discharge ARL spectrometer and five spark instruments from SSAB Raahe, Outokumpu Avesta, Uddeholms Hagfors, Dillinger Hütte Dillingen and Voestalpine Linz. Four to five measurements were made in direct succession over the surfaces of the samples, out of this the intensity scatter (1s) and relative intensity scatter (%) were calculated to serve as a measure of the intensity precision.

To obtain statistically significant results the procedure was repeated several times on different occasions and the average scatter calculated. For the spark instruments 3 series of 5 sparks were taken at each occasion and this was repeated at 3 different occasions giving altogether 9 series consisting of 5 sparks and averages with an estimated uncertainty normally in the range 10–30 % relative. Most results, for both source types and all the instruments, fell in the range 0.5–1.5% thereby giving good justification of the so called 1% rule that was previously established based on less comprehensive glow discharge measurements.

Lower scatter was obtained on rather few occasions whereas higher was considered to indicate special circumstances or problems related to the element, line, sample or instrument. Normally, however, for a given instrument most elements and lines gives closely the same scatter and the level dependence is weak in particular for the spark. The rather uniform results for the intensity scatter makes it very suitable for function control in analytical spectroscopy.

Show and order
Top of page