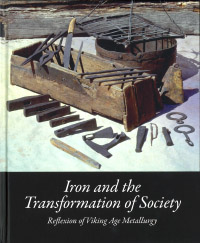 The Viking Age and the Early Middle Ages have been considered the period when Scandinavian people emerged on the global stage. The Scandinavians and their raids from this era are often portrayed as violent and brutal. They are less known for the development of the production of iron which in turn led to the process of creating preconditions for the building of societies, where people interacted and collaborated and formed the future together. This meant new opportunities for agriculture and architecture, but also for weaponry needs. A new society was shaped by steel.